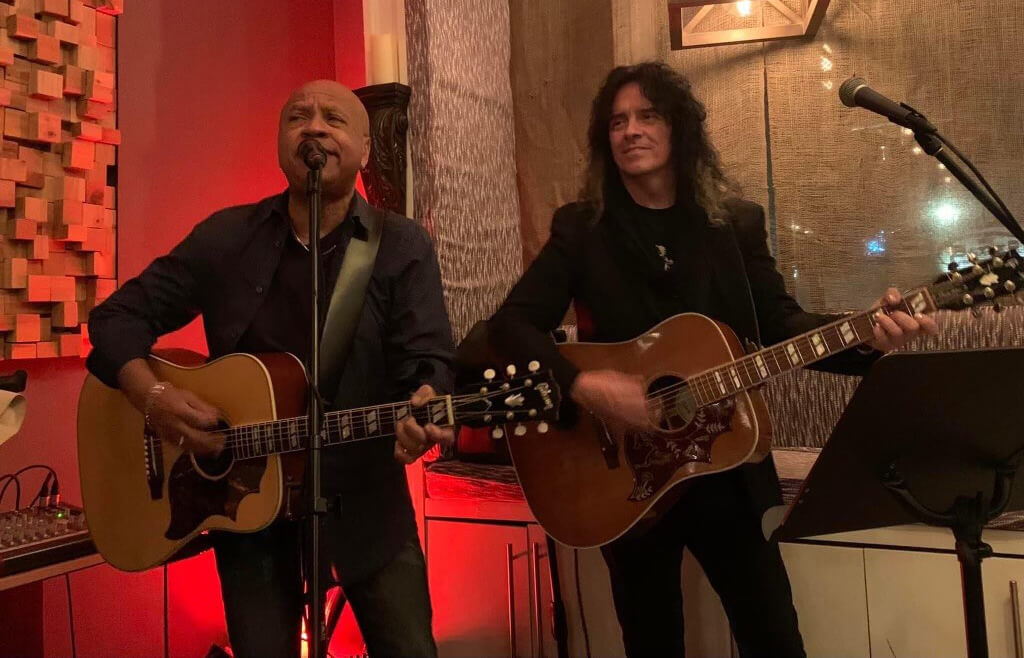 Chicago and Newfoundland have joined forces as these two celebrated musicians, both with long and notable careers in the music industry, have teamed up to form an entertaining and dynamic musical duo. These two Juno award winners, Jeff Jones (originally from Chicago), and Gerry Finn (a transplanted Newfoundlander), have been an intrinsic part of the Canadian music scene for decades. Fast friends, both with a wicked sense of humor and a love of making music together!

Jones’ distinguished 50-plus years in music began as a member of the gospel rock band Ocean, recording the million-selling hit Put Your Hand in the Hand. His career has focused on lead and background vocals, as well as writing, recording and producing numerous albums and videos, plus two solo projects (Positive and Heir of Desperation). He has recorded and performed with countless artists including Burton Cummings (Guess Who), Lawrence Gowan (Styx), Infidels (Molly Johnson) and Red Rider. Jones continues to tour throughout North America with Tom Cochrane and Burton Cummings.

Finn, trained in jazz and classical guitar, is well-known for his work with Canadian metal bands Killer Dwarfs and Helix. He has toured or shared a stage with an extensive list of artists including David Usher, INXS, JD Fortune, Holly McNarland, Iron Maiden, Pantera, Bruce Cockburn, Alex Lifeson, and so many more. Both Jones and Finn are also members of the iconic Canadian band, The Carpet Frogs, Burton Cummings’ tour band.

Recipients of numerous awards including gold and platinum albums, Jones and Finn will keep your toes tapping and the fun in your heart with a medley of originals songs, plus some of your favorites by artists such as Fleetwood Mac, Allman Brothers, Tom Cochrane, Blue Rodeo, Doobie Brothers, and more.

Jeff Jones and Gerry Finn…..simply for the love of music.

See Jones-Finn at The Block Co.